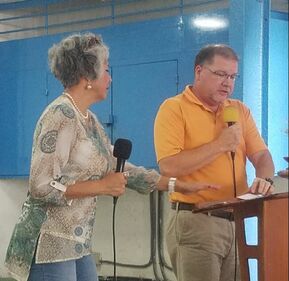 Pastor Keith Pierce received a Master of Divinity from the Atlanta Satellite Campus of New Orleans Baptist Theological Seminary. He holds a Bachelor of Arts in World Religions from the University of Tennessee. He has served in several ministry roles including pastor, associate pastor, evangelist, chaplain, disaster relief, denominational leadership, community leader, sports ministries, singles ministries, author, prayer coordinator and many other leadership roles. He has served in supervision with United Parcel Service, FedEx Ground, TSA and has been the CEO of a regional corporation. Pastor Keith has been involved in Upward Basketball, AAU basketball and the Tennessee Fury WNBA team. He has been active in outdoor sports ministries with bass fishing tournaments, soccer, rugby, softball and archery. He has taught leadership and evangelism in Ukraine, Romania, Nicaragua, Haiti, New York City and several other places in the USA.

Coy Pierce was born in Corpus Christi, Texas and was a musician in the churches and missions her parents served in Texas and Mexico. She attended Tennessee Temple University and studied music. She also taught Spanish in the Rebekah Home for troubled girls in Corpus Christi, Texas. After leaving Texas, Coy found herself in Atlanta, Georgia, where she worked in the legal field for several years, while singing, playing the piano/keyboard in both traditional and contemporary churches.